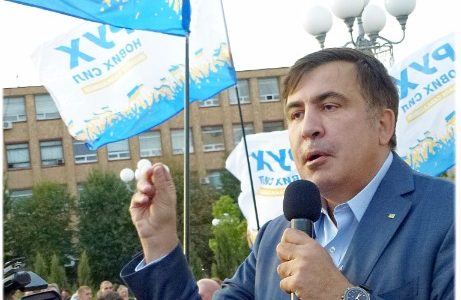 Saakashvili is a European politician of a new formation who is not afraid to walk, communicate and be among ordinary people. Back in 2014, he was Ukraine’s main friend and lawyer in Europe and America, delivered remarkable speeches in defense of our country, explained to all foreign politicians that we had a real war with Putin, that we need sanctions against Russia, and Ukraine need foreign aid.
He sincerely believed that President Poroshenko really wants real changes in Ukraine, so he responded to the invitation to take part in the reforms, but he faced betrayal and double play as the president himself, whom Mikheil needed only for PR and his team! Behind the scenes, Poroshenko negotiated with oligarchs, separatists, bandits from the former Party of Regions and even with Putin (regarding his business in Russia), it is natural that Saakashvili, who really took up reforming activities, became too dangerous for him!
Poroshenko is gradually on the path of ordinary dictatorship! The Ukrainian people will not allow this!
This is evidenced, among other things, by the meeting with the Cherkassians who, from the mayor of Cherkassy to the rank-and-file conscious citizen, supported Saakashvili, Sergei Leshchenko, Yuri Derevyanko and other young Ukrainian evrodemocracy! Glory to Ukraine!